The technology is called the Electrochemical Activation of Solutions (ECAS). Water or water solution is treated with electricity in a special electrochemical module. This module has two interior chambers (the cathode and the anode), which are separated by a thick diaphragm that only allows penetration at the ion level.

When the water or water solution flows through the module, it gets treated either by the cathode or the anode. This type of treatment is called unipolar. No additional chemical substances are added during the activation.

As a result of the treatment different properties of water and water solutions are modified, such as the pH, Redox, and molecule structure. The liquid achieves increased reactive properties and becomes either activated drinking water with negative redox, or a safe and effective disinfectant (AQUAECA). Another product of ECAS is catholyte – an efficient deoxidizer and washing solution with high pH.

An important consideration is that the effect on ECAS products is temporal. After a period of time (from several hours to several weeks) ECAS products come deactivated and dissociate into the input products. That explains why ECAS products are environmentally friendly. 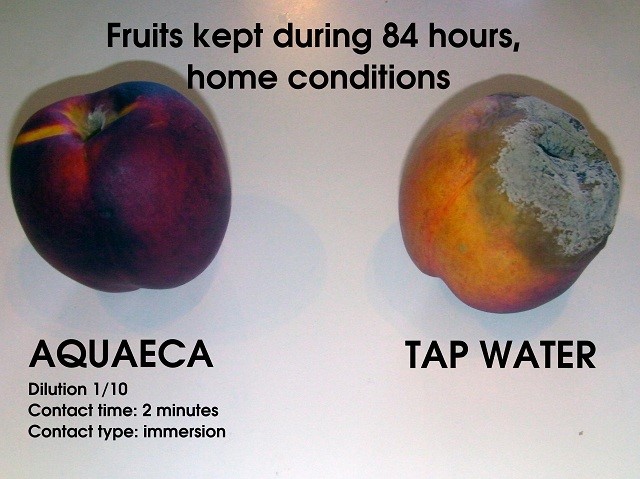 What is your conception of disinfectant?

Big plastic bottles of chlorine with an (X) symbol or a blue liquid with a dispenser on the top? Maybe tablets, which you add into the water? UV lamps on water recycling stations?

AQUAECA is an entirely different solution. That is because AQUAECA  devices allow you to get any amount of disinfection solution you want using only water, table salt and electricity. You can choose the concentration of the solution according to your needs.

However, the main advantage of AQUAECA is something else:

AQUAECA can replace all the disinfecting and washing solutions of a company or a building.

Why? Because it is:

AQUAECA is produced in electrochemical cells from water and salt using electricity. Ions of the saline solution react in the different chambers of the cells, producing natural oxidizers. Among them – hypochlorious acid (HCLO), chlorine dioxide (ClO2), ozone (O3). Hypochlorious acid, for instance is also produced in the human body as a product of phagocytosis and is our natural disinfectant to fight pathogen bacteria.

Which microorganisms does AQUAECA do away with?

Some fields of application of electrochemical activation

Washing of surgeon’s hands and arms.

Decontamination and purification of drinking water.

Sterilizing items of household use, items of medical care, washing and bleaching of linen.

A distinguishing feature of the element is its diaphragm’s insensitivity to organic and inorganic contamination (the diaphragm properties can be completely restored by the chemical cleaning of the element without its disassembling). Besides, one can control the chemical composition of the anode or cathode electrochemical synthesis products by varying the pressure difference on the diaphragm up to 1.5 kg(f)/cm2.

The element allows concurrent electrochemical treatment of liquids with quite different properties and chemical composition without their mixing, e.g. milk and water, oil or distilled water and saline water solution.

The element is patented in Russia (Patent No. 2078737) and in the USA (USA Patent Application, Serial No. 08/613,968), currently applications for patent issuance are submitted in 50 countries.

The electrochemically activated neutral anolyte ANC which is certified for the applications listed above can be produced only in the STEL devices containing the RFE electrochemical reactors with the elements. Any other electrochemical systems even if they allow obtaining solutions similar in physical and chemical properties are not able to produce the metastable biocidal solution containing the mixture of peroxide compounds, the analogues of the products of natural bioelectrochemical reactions proceeding in the human body and the warm-blooded animal organisms.

The diaphragm of the element is made of ceramic on the base of the zirconium, aluminum and yttrium oxides. The diaphragm is highly resistant to the action of concentrated and diluted aqueous solutions of acids, alkalis, oxidants, reducers and aggressive gases (chlorine, chlorine dioxide, oxygen and ozone), is strongly resistive to heavy metal ions, organic compounds and features long life time (50,000 – 60,000 hours).

The outer electrode of the element, the cathode, is made of titanium.

The anodes of the element are made of titanium and are plated with the ruthenium and iridium oxides. Catalytic properties of the anode plating, selective features for the electrochemical synthesis and the ability to produce gas microbubbles of an optimal size are controlled by the technology of coating.

The mechanism of the biocidal effect of an electrochemically activated solution (ANC anolyte) is similar to that of gas plasma, and its degradation products are source substances, i.e. low-mineralized water.

COMPARISON OF CHARACTERISTICS OF THE ANC ANOLYTE AND DIFFERENT DISINFECTING SOLUTIONS

Additional information on the ANC anolyte.

The ecologically safe electrochemically activated ANC-type anolyte has the life time which is sufficient for disinfection procedures. After being used it degrades spontaneously without producing toxic xenobiotic compounds and does not require neutralization prior to draining to the sewage system. The neutral anolyte ANC produced in the AQUAECA devices is not only an ecologically safe and highly effective agent for disinfecting, pre-sterilization cleaning and sterilization of medical equipment. Moreover, it is an antiseptic which can be spread over the injured and uninjured skin, the mucous coats, cavities and wounds to prevent development of local infection lesions and sepsis. The electrochemically activated neutral anolyte ANC is a multipurpose agent, exterminating all major systematic microbe groups (bacteria, fungi, viruses and candida) without injuring tissue cells of the human body and other higher organisms, i.e. somatic animal cells which are part of a multicellular system. The neutral anolyte is the solution of the basically new type possessing unique biocidal properties and combining features of the washing, disinfecting and sterilizing agent. The activated ANC anolyte produced in the AQUAECA devices kills disease agents of the bacterial, viral and fungous etiology (Staphilococcus aureus, Bacillus pynocyaneus, Escherichia coli bacillus, hepatitis-B virus, poliomyelitis virus, HIV, adenoviruses, TB agents, salmonollosis, dermatomycosis agents et al.) The ANC anolyte considerably exceeds by its efficiency such well-known disinfecting agents as chloramine, sodium hypochlorite etc.

Positive results were obtained in killing the plague and anthrax agents with the ANC anolyte solutions. High efficiency of the AQUAECA-produced solutions was experimentally proven for decontaminating the combat materiel and equipment with the concurrent degassing as well as for removing toxic components of the missile fuel with the components degrading to non-toxic elementary compounds.

On all questions of purchase and delivery of goods write at email: info@ph3k.ru